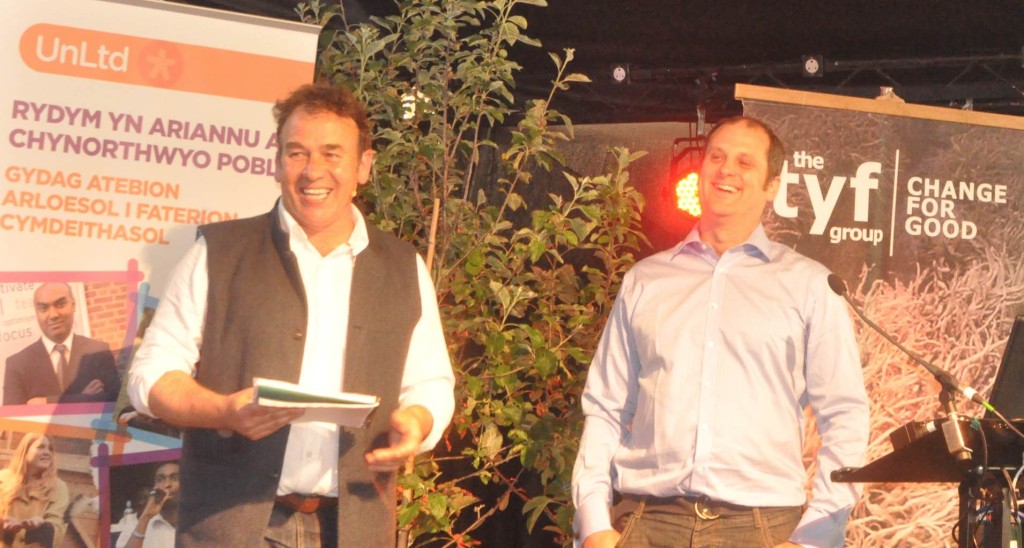 After being announced as the winner, when I stood on stage and told the 150 people in the audience that I wanted to buy some cows, everyone looked at me as if I was completely mad…

After that experience I thought I better make a public statement about what winning the award means to me and the team at Gower Power, and also share a thing or too about the cows.

The Future Dragons is an event at the Hay on Wye Festival that spans over three days. Budding and experienced, petrified and over confident, social entrepreneurs deliver three minute pitches to a panel of judges and tent full of people. The over confident ones get grilled whilst the nervous ones get treated with a bit more sympathy. It is social enterprise’s version of the dragons den but done live not in a studio. The audience vote, the judges vote, and the winners emerge… but the best bit is that everyone who pitches learns masses from the experience, makes new contacts and almost always goes home enriched in some shape or form even if they don’t take the prize money.

The Build It Award is an investment package managed by Unltd, an inspirational organisation that identifies and supports social entrepreneurs. Social entrepreneurs are people that want to create businesses that make the world a better place. Unltd hand out dozens of Start Up Awards across the UK of up to £5k, this year, in Wales, they will only be handing out one £15k Build It Award and that is to Gower Power ☺. A Build It Award is there for businesses that have established themselves and that can already demonstrate they are delivering a social impact. It is about scaling up and making a bigger difference.

My pitch was predominantly about community energy and timebanking. It was about the community owned solar farms we have in the pipeline, and how we will use the profits from the sale of electricity and Feed In Tariffs to invest in a time currency that acts as like a social lubricant to get people to help each other out. Both community owned solar and timebanking are tried and tested business and community development models, just nobody we are aware of has used one to subsidise the other, and the social impact of the other to encourage local investment. Central to the success of our future community share offers (we will be looking to raise over £1million later this year) is the need to communicate some pretty complex concepts to our prospective share buyers. So with the award, we are hoping to make some short and punchy videos about the key things that would encourage people to invest. For example:
– Community shares: how they are different to ordinary shares and what you get from investing in them
– Enterprise Investment Scheme: an explanation of the tax relief that is available to any UK tax payers who invests in us
– Time currency: what on earth we mean by it, how it works, and why it is worth supporting
– Solar power: latest information on the cutting edge technology we will be using
– Co-ops: why despite the bad press created by the Co-op Group, local and democratic businesses (e.g. our energy co-operatives) hold the key to a sustainable future.

Another thing we would like to do is contribute to some salary costs to help a loan, we have just been offered for paying these, stretch a little further. And unfortunate, but true, we have some pending legal bills that will need sorting…. But we are still hoping we can squeeze a couple of cows into the budget…

In my three minute pitch although I did touch on the fact that we are involved in community farming, I didn’t mention our wonderful flock of sheep and the role looking after them had played in bringing a community together both emotionally, through endless dialogue in how best to care for them, and physically, from erecting our first fencing through to the trials and tribulations of our first lambing season. What our group realised is that the animals themselves have been like a wonderful glue that have bonded us as a community. We also realised that this was an experience we would one day by able to share with a wider group of people. With the recent discovery that our smallholding has commoners’ rights attached to it, our ambitions started to escalate.

There is also another story about livestock and their role in nature as eco-engineers, which we think everyone should be aware of, and that story is being told by people like Alan Savoury in his brilliant work at the Savoury Institute, and Mark Sheppard, through his book, Restoration Agriculture. If you are interested in ecology or farming and haven’t heard of them, I urge you to look them up.

I will of course keep you updated soon as we get the cows, even if we can’t squeeze them into this budget, we will get some one day. Besides, somehow my kids have already named them, Kevin, Phill and Dave… though we won’t be complying with their request to paint them yellow like the minions in Despicable Me.

On behalf of Gower Power Co-op, I would like to thank Unltd for their support to us and for their work across the UK and beyond. It is totally inspirational and we hope one day we can channel some of our profits into their support programmes.

Back to News & Blog

Stay in the loop!

Organisations investing in us: